This type of alarm system requires a cable running from each component back to the main control panel. It is commonly used in buildings prewired for an alarm during the initial construction phase. We would advise you to contact one of our engineers to arrange an onsite visit to determine what type of system is best suited to your building. 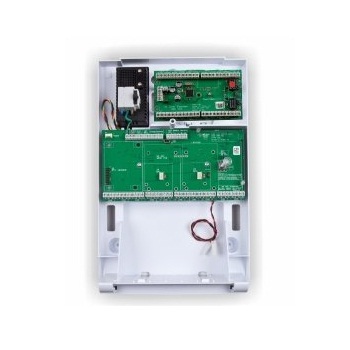 This hybrid panel can take both hardwired and wireless devices. Each alarm device is wired back to this panel.

This device is how you communicate with the control panel. It 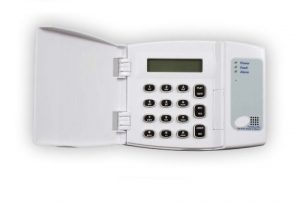 is most commonly fitted at an entry/exit door of the building. It allows the users to arm/disarm the system. 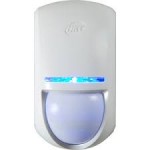 This device is called a PIR which stands for Passive Infrared. It can be fitted in hallways, landings and rooms. Many people believe this sensor detects motion and movement but in fact it detects a change in temperature. So if a human body was to move past a PIR it would detect the body heat and trigger an alarm.  Pet friendly PIR devices are also available.

This device is most commonly fitted on windows. It has one function and that is to detect an impact to the window frame or glass pane.

This device is fitted on entry/exit doors. It detects when a door has being opened.

This device can be fitted in a number of locations throughout a building. Once pushed it will activate the alarm regardless if the alarm is in the set or unset state. It can also be programmed as a silent alarm in the event of a hold up situation.

device sounds when the alarm is activated and can be programmed to turn off after a set duration of time.

This device again is fitted in the control panel. It does not require a phone line as it works off the mobile network or connects to your WiFi. It can be set up to contact you and three alternative numbers directly by phone call or SMS message in the event of an alarm activation.